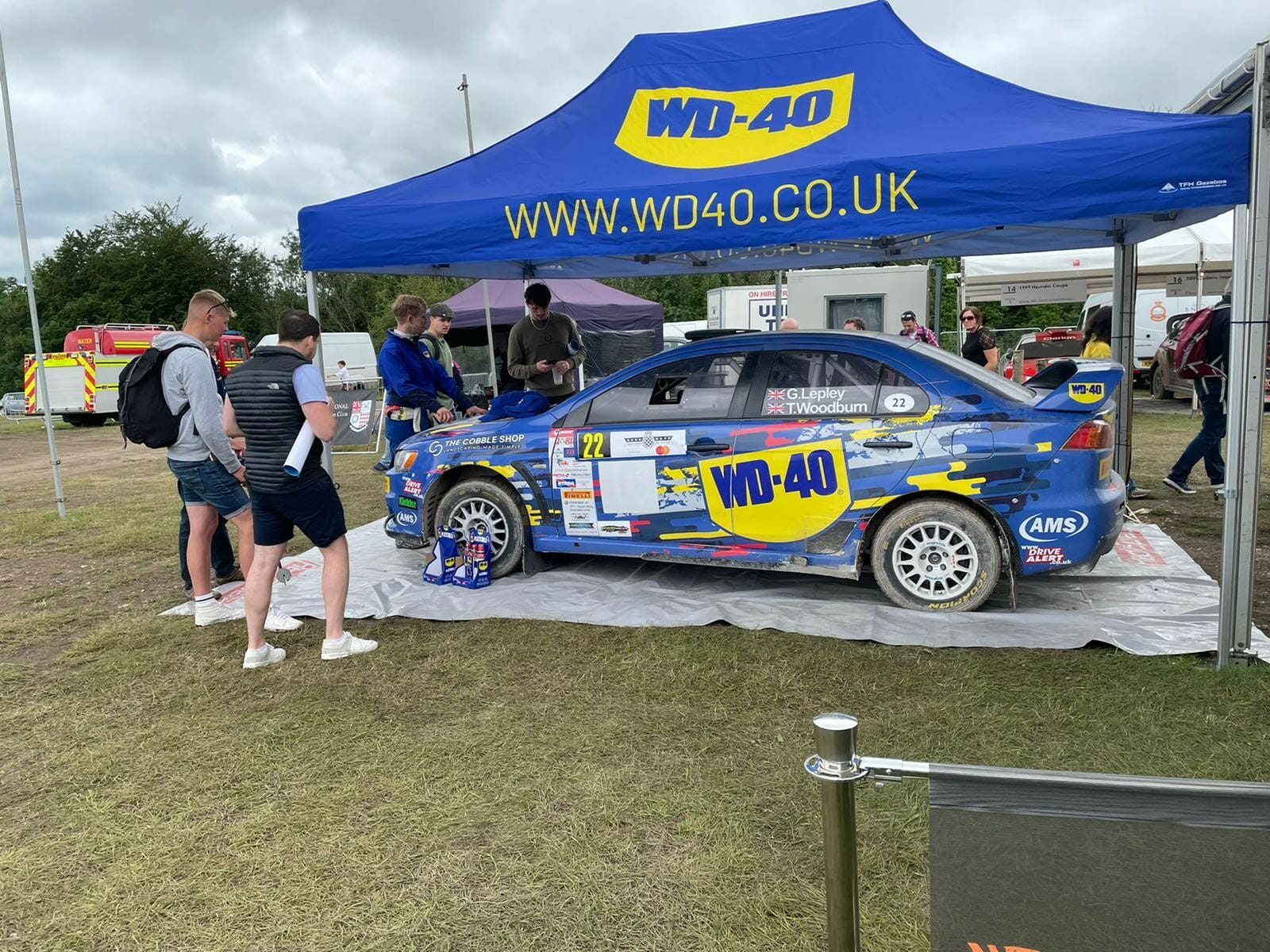 The opening round of the 2021 British National BTRDA Rally Championship took place on Saturday 10th July in Builth Wells, Wales for the Nicky Grist Stages.

Attracting a full entry of competitors, the event saw a very competitive field of drivers on the entry list, with WD-40 athlete George Lepley seeded as the first car

in the Championship, clearly the organisers have some high expectations of the youngster! However, the build-up to the event would be a tiresome one for the team.
Invitation to the prestigious Goodwood Festival of Speed meant the team would head to Chichester on Wednesday before the Nicky Grist Stages to showcase their

Mitsubishi Evo X in WD-40 colours to the tens of thousands of fans at the event.

“It was a privilege to be invited by the Duke of Richmond to the event, for me it was #fantastic to see so many supporters of the Evo
X and its iconic livery on the rally stage, interacting with fans of all ages” explained George.

The rally team left Friday afternoon from Chichester to Builth Wells for scrutineering ahead of the Nicky Grist Stages on Saturday.
The dry and dusty stages over the Epynt ranges in mid-Wales provided a huge challenge for the crews. The Mitsubishi Evo X was ready for action
in stage 1, 3rd fastest through the first 2 stages of the rally for George and co-driver Tom Woodburn, despite a spin in stage 2.

“It was a steep downhill into a hairpin, I may be carried a little too much speed into the corner
and we just spun on the loose gravel. The feeling was perhaps a little too good and  confidence too high – looking forward to the next one” explained George.

Stage 3 and 4 saw stage times from George and Tom good enough for 2nd position overall which was great progress from the duo, just 14 seconds off the lead
going into the mid-day service.

“Those 2 were much better, we caught the car in front though and lost time with the dust, hopefully
we can get that sorted for the afternoon loop and chase down the leaders.” said George.

The duo left service on the way to the afternoon loop of stages and on the road section noticed an issue with the gearbox flat-shift sensor, causing the car to cut out randomly.
George disconnected the sensor at the stage arrival to hopefully cure the issue, albeit have to use the clutch all the way through the stage.

Yet, half-a-mile into the stage, a further issue with the gearbox caused the gear lever to jam and stopped George from going up or down the gears as he approached the corners,

causing a great time loss. After speaking the team on the phone at the end of the stage, they concluded there was nothing George and
Tom could do, given the issue was internally on the gearbox, the choice was to either continue but at reduced pace to ensure no further damage to the gearbox, or retire from
the event. With his high levels of determination, George decided to continue through the next stage to see if the issue would get any worse, however haemorrhaging time.

“So frustrating, nothing we can do but I want to get championship points so we will continue unless the gearbox gets worse, but it is costing us a lot of time” explained George.

The duo continued through the final pair of stages to finish the event, amazing considering the near retirement after stage 5 of 8 in the rally!