Home » ATHLETE » Aruba.IT back on the podium at Laguna Seca

Aruba.IT back on the podium at Laguna Seca 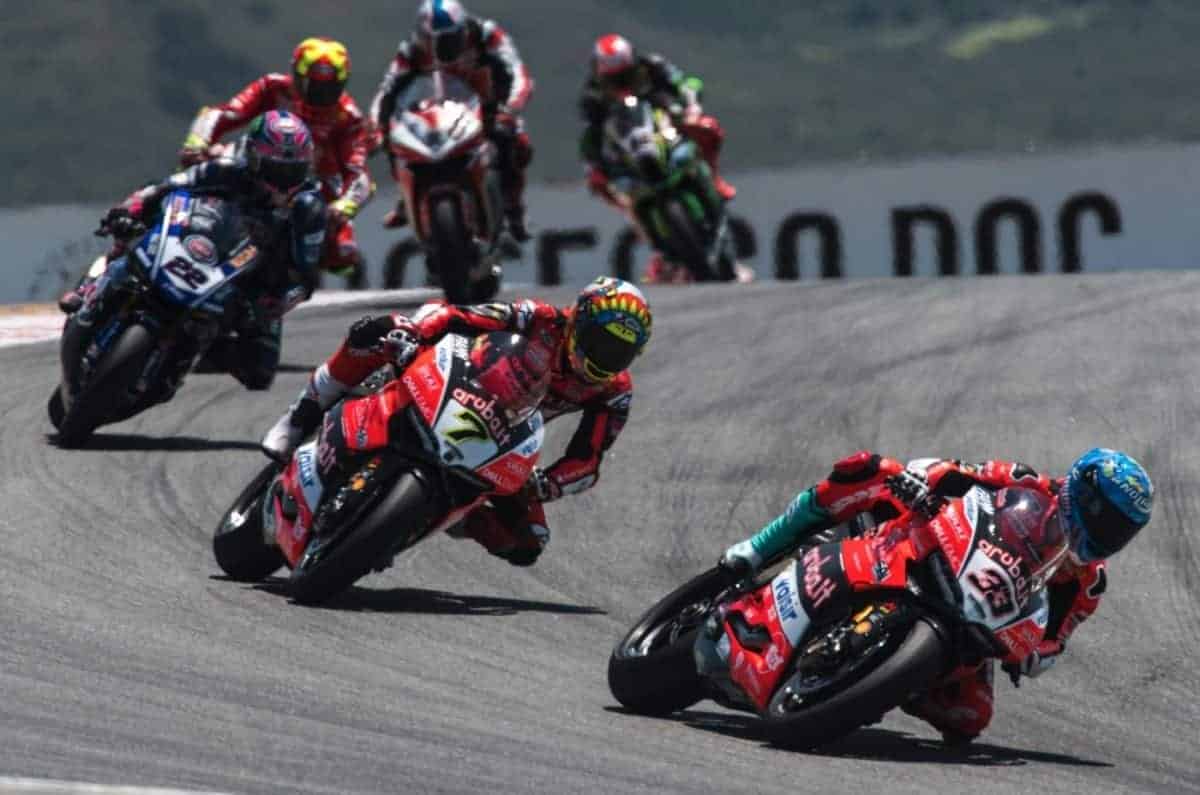 The Aruba.IT Ducati team stepped back on the podium at Laguna Seca (United States), home of the eighth round of the WorldSBK Championship, thanks to a brilliant second-place finish by Chaz Davies.

The Welshman, who took pole position earlier on, maintained the lead at the start. He posted the race’s fastest lap with a 1:23.041 (the new track record) to pull away. In tricky conditions – with circa 50 degrees on the tarmac and low grip – a wobble going into turn 8 moved him into second place, which he then kept until the checkered flag. Marco Melandri, penalized by a Superpole finished in tenth position. He showed great tenacity coming back to fifth place on a track where it’s particularly difficult to pass. 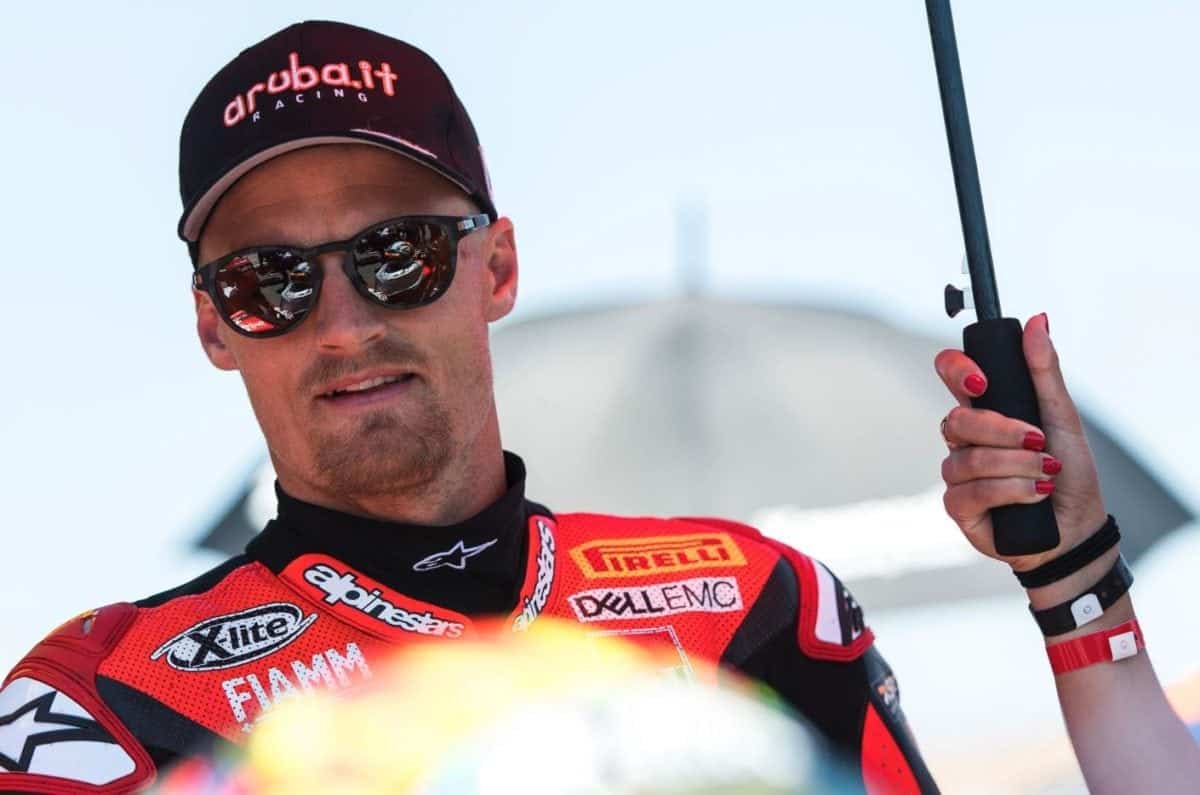 The Italian finished strong, showing the best pace in the final laps. Tomorrow he will start from second position on the grid.

Chaz Davies: “It was a good race. From where I sat, I did all I could. I gave up the lead while pushing, but honestly I don’t think the final result would have changed. I was trying to keep Rea honest but we just didn’t quite have the pace in the last ten laps. A tenth was lost here and there, so I tried not to make mistakes and see what he had. He made a couple of errors at the Corkscrew, but not big enough for me to erase the gap. Overall I’m very happy, we got pole position and fastest lap but just missed the big trophy. We got good data and learned a bit today, so hopefully we’ll come back a little bit stronger tomorrow.”

Marco Melandri: “Today we faced a difficult race despite the fact that the weekend had been going really well so far. In Superpole I didn’t find much grip and I couldn’t make a good lap. Starting from fourth row wasn’t easy. Early on I couldn’t ride smoothly but after a while I started to feel better. Unfortunately, we were too far by then to challenge for the podium. I tried to catch Laverty but I made a mistake during the last lap and probably it wouldn’t have been possible to pass him anyway. Tomorrow is a new day, we’ll try improve during warm-up and we’ll see how we fare in Race 2. Starting from first row will help, but it’ll be more important to improve the pace.”

The Aruba.IT Racing – Ducati team stepped on the podium once again in Race 2 at Laguna Seca (United States), home of the eighth round of the WorldSBK Championship, with yet another second-place finish by Chaz Davies. The Welshman started strong from third row, immediately recovering positions. 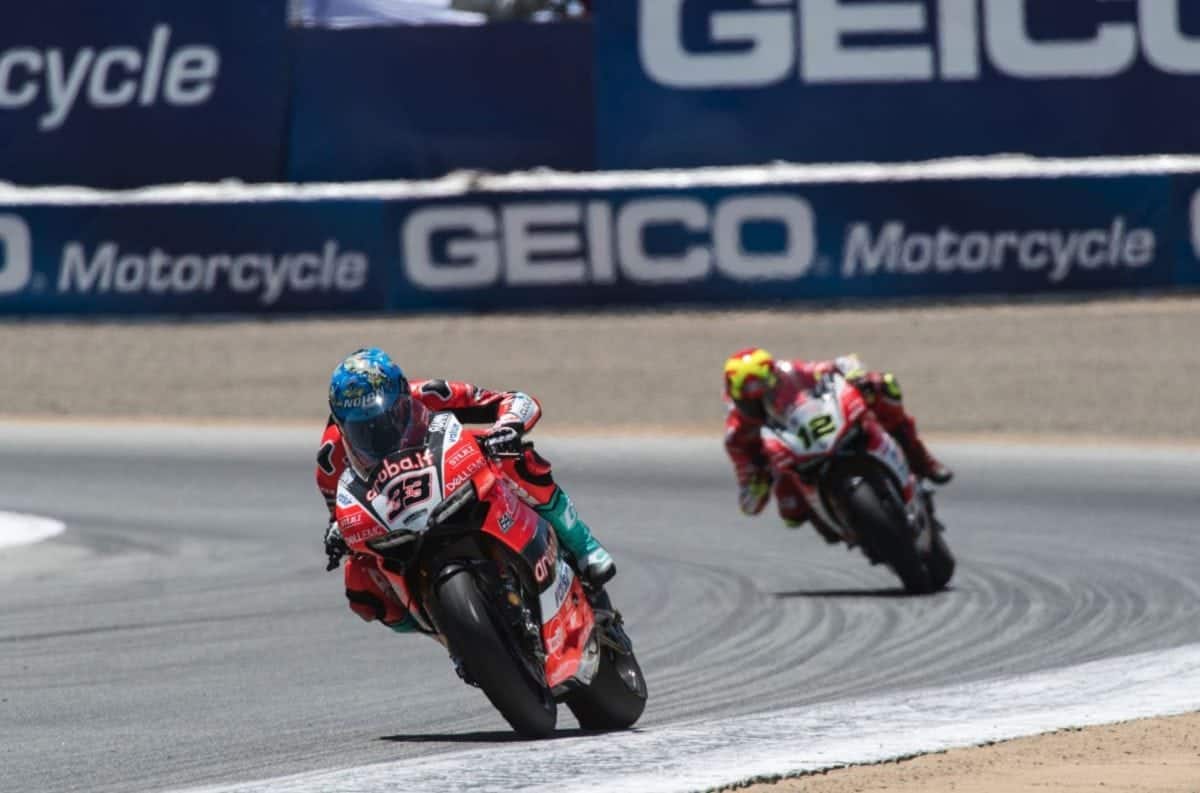 After some hectic early laps, also due to the track’s layout that makes it difficult to pass, Davies found his pace and managed to climb back to second position, mirroring Race 1’s result. Marco Melandri, who started from first row, faced some more difficulties. He crashed at turn 5 during the fourth lap while trying to stay with the leading group, in fourth position.

Chaz Davies: “All in all, we can be happy with this round. The goal is always to win, but it’s good to be back at the front and I feel we got the best out of myself and the package this weekend. We’re back at the sharp end after a couple of tough rounds. We’re not too far away from our main rivals, we just need to fine tune some details. Today I got a good start but, to be honest, I was twitching a bit with the front in the early laps and I wasn’t even pushing that hard. Then things leveled down, I got into my rhythm and climbed back to second. We’ve made strides in the areas in which we’ve been struggling recently, so we just have to go to Misano and see if we can polish up those final details.”

Marco Melandri: “Unfortunately, when the grip decreases due to high temperatures, the bike becomes more difficult to handle when the tarmac is a bit bumpy. Today, I was losing a lot in corner exit and, while trying to make up for it, I had to push more under braking. Laguna Seca is particularly demanding with the front, but I didn’t expect to lose it in that corner. It’s a pity, because we started the weekend strong but, as the conditions changed, we struggled. I’m looking forward to Misano, where we scored our first win last year and we know we can be competitive.”

The Aruba.it Racing – Ducati team will be back on track at Misano (Italy) for the ninth round of the 2018 WorldSBK Championship, scheduled for July 6-8.