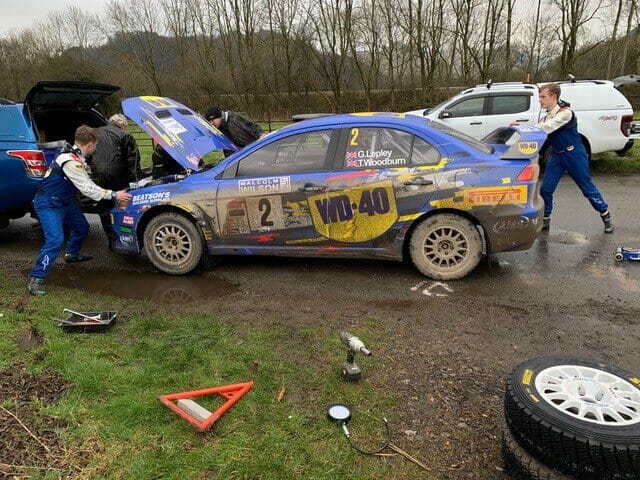 The WD-40® Rally team were forced to make their first rally retirement in three years at the Malcolm Wilson Rally. George Lepley and co-driver, Tom Woodburn, embarked on their second round of the BTRDA Championship in Cockermouth, the Lake District this weekend. George was seeded into position as car number two, which shows his obvious favour to win by the organizers.

As the pair headed into stage one of the Malcolm Wilson Rally, the conditions were wet and muddy, but George confirmed that he felt confident after all the prep and pace notes that they had taken.

George said: “The first mile felt good, although very slippy, but then we picked up a puncture.” With no service until after stage three, it was time for George and Tom to get their hands dirty!

Once the tyre was changed, the pair headed into stage two where it became apparent that there was something still amiss. The car was pulling to the left and right whenever they tried to accelerate or brake. Whilst they handled the car carefully through stage two, the issue caused the car to spin, costing the pair a precious twenty seconds.

The guys went on to complete a mercifully short stage three using a different map setting and then headed to a quick twenty-minute service. There, it was discovered that the front suspension was bent which was causing the car to pull and move to one side.

After a quick repair, it was on to stage four. George commented: “The car felt much better than it did in stage two and three but is still not safe when we are flat out at 130mph!”

In the service following stage four, the team made the difficult decision to retire and save the car for future rallies as there would not have been enough time to replace the suspected damaged parts. George said: “Of course I am absolutely gutted, but we wouldn’t want to put the car in a ditch on the next stages. It’s not the result we all wanted, but that’s rallying!”

This is George’s first retirement in three years, so he is naturally disappointed, but he is using the time between now and the next rally to give the car a serious rebuild!

Click here to find out how the team did at the Cambrian Rally.