Carnage in the woods for Danny Hart

WD-40 Athlete Danny Hart like many others rolled into this weekend’s race keen to dominate and provide the world with a true display of his speed and form after the farce of Round 1 in Lourdes when the worlds fasted men were punished by a rapid change in weather conditions.

This year a few course changes had been made. A new fast flowing section mid-way down caused no issue, but the infamous woods section lower down the course – this would be where the race was won or lost.

To win a rider would need to fully commit, the risk versus reward scenario was very much in play – you could play it safe and bank some championship points, but in doing so you would be saying goodbye to the win. If a rider before you crashed or slid through, then your chances changed every time a rider went before you.

Danny was one of the riders who fully committed but unfortunately came to blows with the course falling heavily over the bars. Destroying all chances of a win and even a top 20 position.

Danny however wasn’t alone with many riders not even making it through the woods when they had decided to play safe. To put this into some sort of context the top 5 literally reflected the number of people who managed to get through the woods – it was carnage! 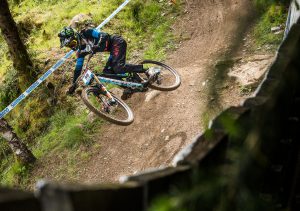 But that’s the risk of racing – until his crash Danny was several seconds faster than the fastest time of the day. It’s clear that Danny is still in blistering form but the luck has not come his way yet.