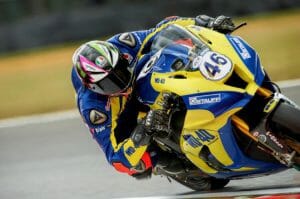 Mason Law took to the track for Round 5 of the Pirelli Superstock 1000 at Snetterton. Mason had been flying in practice, finishing 2nd fastest in the first session and 6th fastest in the second session.

Despite a slight knock in the opening stages of qualifying, he came through to qualify in 7th position!

Mason put in an unbelievable performance, eventually finishing in 2nd place and breaking the lap record by 0.8 seconds along the way!

This result moves Mason up to 5th in the overall standings just 11 points off the top 3!

Having qualified down in 16th position for race one, Tommy was left in last positon foll

Despite this, Tommy fought back to finish in 14th place! This became a familiar result for the Wiltshire rider, came home to finish in the same position in race two!

Although continuing put points on the board, 14th positon is becoming a bit of a sticking point and breaking into the top 10 is becoming increasingly difficult, this has left both Tommy and Team manager Brent Gladwin rather frustrated with recent results.

Fingers crossed Tommy will be back on form for round 6 of the MCE British Superbike Championship at Brands Hatch later in the month.

A quick mention for Liam Delves, who continued his comeback from injury with a solid 7th place in race one and 8th place in race two of the HEL Performance Motostar British Championship!!

All of the Team WD40 boys will be back in action at Brands Hatch on the 21st-23rd of July!