The Run of the Day! 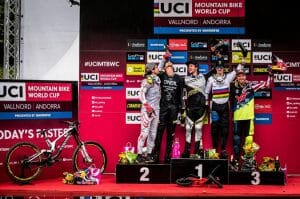 To date, Danny Hart’s season hasn’t been as smooth as he would have liked. One of the affected elite as Rd1 in Lourdes as the weather turned, a victim of the dreaded wood section at Rd2 in Fort William and an unusual mechanical issue 3 metres into his run at Rd3 when his chain snapped in Leogang. Things needed to change as the world cup series rolled into Val Nord Andorra for Rd4.
For Rd 4 Danny had elected to return to the frame set up he used in 2016 to blistering effect. The decision paid off.
Danny Qualified in 6th similar to his efforts here last year, evidently on the pace and at the sharp end of the race.
The Val Nord track is one of the steepest on the planet and one of the most technical. Danny has always been good here, but the level of the opposition and the options of lines all the way down the mountain make this a consistently hard race to call.

Race day and times came tumbling down as the pace and level increased, the occupant of the hot seat – the chair that the current leader takes in front of the crowd changed until the ‘wow times’ times began to emerge.
Enter Danny Hart – WOW?! Danny has a reputation for putting it all on the line when it’s race time and for many Danny’s commitment, his creative line choice & pure on the limit speed was the run of the weekend. Danny finished his run taking ne less than 5 seconds off the current lead time – WOW?!
The remaining few wound their way down the Val Nord course and at the close of play Troy Brosnan won from the G.O.A.T Greg Minaar in 2nd with Danny Hart in 3rd.
Andorra delivered a welcome return to the results sheet for Danny who has always been in form this year and at pace but desperately unlucky on race day.
Onto Lenzerheide in Switzerland on the 7th – 9th July for Rd5.