Back from the brink: Southampton’s rebirth told through three iconic kits 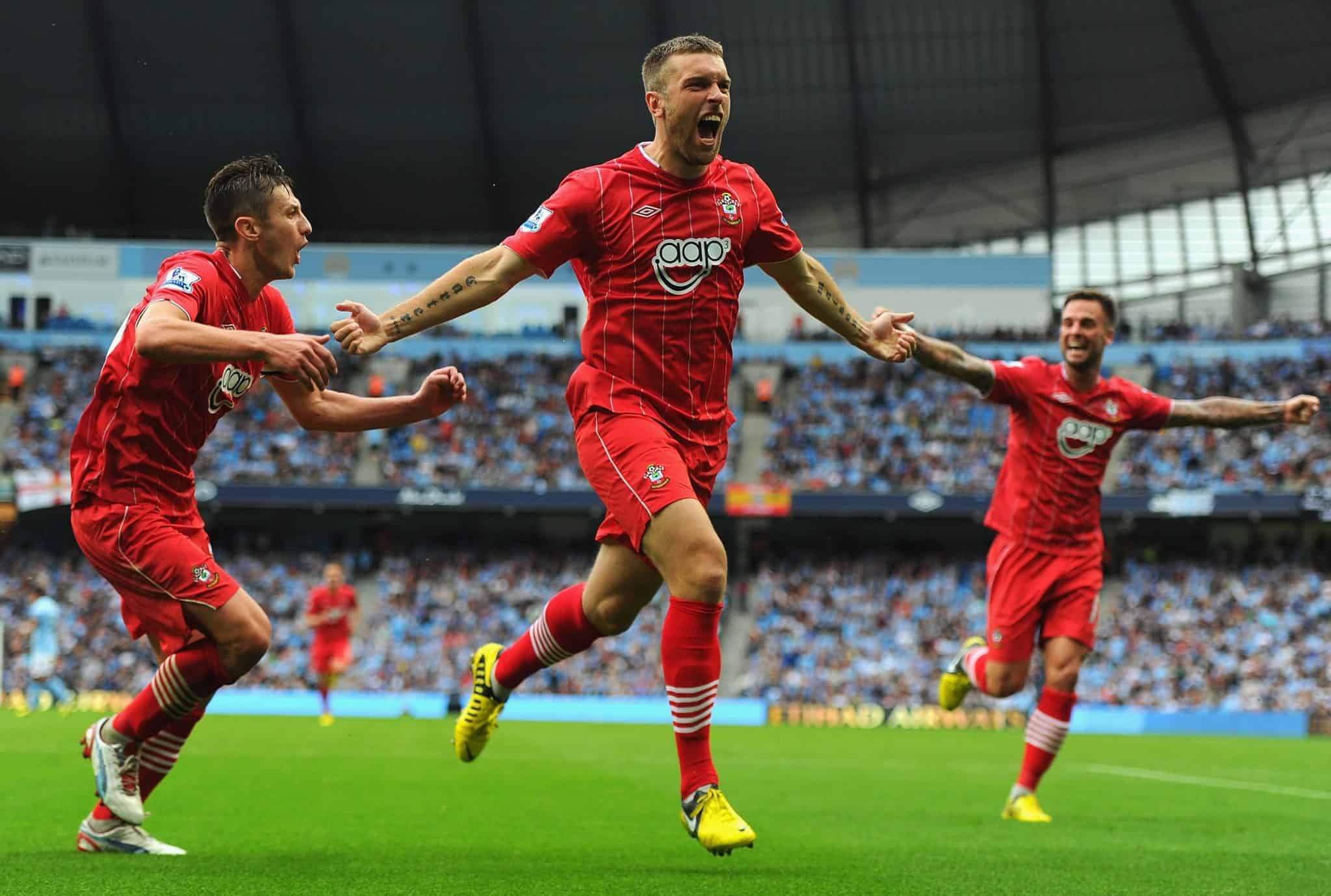 After a tricky couple of seasons under the stewardship of Mauricio Pellegrino and Mark Hughes, Southampton’s status as a stable, well-run Premier League club looks to have been restored. Led by ‘the Alpine Klopp’ Ralph Hasenhüttl, the Saints recorded an 11th placed finish in 2019/20 and ended the campaign on a seven-match unbeaten run.

Things are looking up for Hasenhüttl’s side and there is plenty of optimism ahead of the coming season at St Mary’s. That hasn’t always been the case on the South Coast though. Just a decade ago Southampton were languing in the third tier of English football and the very notion of being a Premier League side felt like a distant memory.

This was a club that had been pushed to the brink – relegated from the Championship in 2008/09, placed into administration when on the verge of bankruptcy and deducted 10 points during their maiden season in League One.

But the Saints’ rebirth is just as dramatic as their fall from grace. As quickly as they plummeted, Southampton returned to the Premier League within a matter of seasons after back-to-back promotions from 2010-2012. They did it in style too, both on the pitch and while wearing a trio of iconic kits, as they climbed the EFL ladder and navigated their debut campaign back in the top flight.

This is the story of Southampton’s journey back from the brink, through the prism of three shirts that defined their renaissance.

The Saints were searching for a new beginning but also a return to their former glories. This was reflected in the launch of the club’s new kit in June 2010. Southampton ditched their traditional red and white stripes to celebrate their 125th anniversary, reverting to the original pattern and colours that they wore back in 1885.

The kit was produced by Umbro and consisted of a white shirt with a thin diagonal red sash, alongside white shorts and black socks. There was no sponsor either, meaning the strip drew comparisons with the Peru national team – one of the great colour combinations in international football. Frankly, it looked fantastic and signified a fresh start for the Hampshire-based side, who took League One by storm that season.

Alan Pardew was replaced in the St Mary’s dugout by Scunthorpe United boss Nigel Adkins and it proved to be a masterstroke. The former physio was able to make the most of a supremely talented squad that included future Premier League stars Morgan Schneiderlin, José Fonte, Rickie Lambert, Adam Lallana and Alex Oxlade-Chamberlain. Southampton recovered from a difficult start, losing four of their opening six games, to finish in second place with 92 points.

The Saints were the division’s second top scorers too – finding the net 86 times thanks, in part, to Lambert’s 20 strikes across the campaign. That anniversary kit certainly evokes memories of goals and entertainment for supporters on the South Coast.

2011/12 saw a return to tradition, as the Saints rolled out a classic red and white striped shirt that favoured simplicity over frills. It was most notable for new main sponsor ‘aap3’, a Southampton-based business solutions company, adding a pleasantly local element to this Umbro offering.

This felt like a kit symbolising a club back on track and doing things ‘the Southampton way’. With an away strip reminiscent of Saints’ yellow and blue 2003 FA Cup final kit, there was a clear nod to the Hampshire outfit’s recent Premier League history, as Adkins’ men targeted a return to English football’s top table.

They didn’t disappoint, with Southampton securing an improbable second consecutive promotion in even more emphatic style than their 2010/11 success. While they again finished in second place, this time behind Brian McDermott Reading, no team could match their goal tally of 85 as star man Lambert took centre stage once more.

A ludicrous 27 goals and 13 assists saw the Liverpudlian grab the headlines, but there was a significant contribution from the supporting cast too. Billy Sharp joined the club in January and chipped in with an impressive nine goals in 15 games, while Lallana, Frazer Richardson and Danny Fox provided the ammunition with 30 assists between them.

Southampton were back and ready to reclaim their place among the elite.

The Saints marked their return to the Premier League with a showpiece strip that reflected their newfound significance as a top flight outfit. The tradition of the previous season was short lived, as an all red kit with thin white pin stripes on the shirt replaced the club’s regular colours. That combination was inverted for the away kit (an all white strip with red pinstripes), creating a ‘ying and yang’ effect between the two outfits.

The division of the club’s colours was appropriate for a season that can clearly be split into two parts. Southampton fans were aghast as the board decided to sack manager Adkins in January, after winning two promotions and with the team sitting clear of the relegation zone in 15th place. Replacing him with Espanyol boss Mauricio Pochettino was viewed as both harsh and a huge gamble at the time, though with hindsight it was a call that helped make Southampton the club it is today.

Pochettino steered the Saints to safety before instigating a high intensity pressing game that helped the club achieve a top half finish the following season. As the likes of Dejan Lovren and Sadio Mané joined the St Mary’s revolution over the coming years Southampton evolved into one of the Premier League’s top talent factories, qualifying for Europe on two occasions.

Southampton were bold with their kit choice in 2012/13 and equally bold in their decision-making. After three stellar campaigns the Saints’ rebirth was complete, as the club ushered in one of the most successful periods of their recent history.