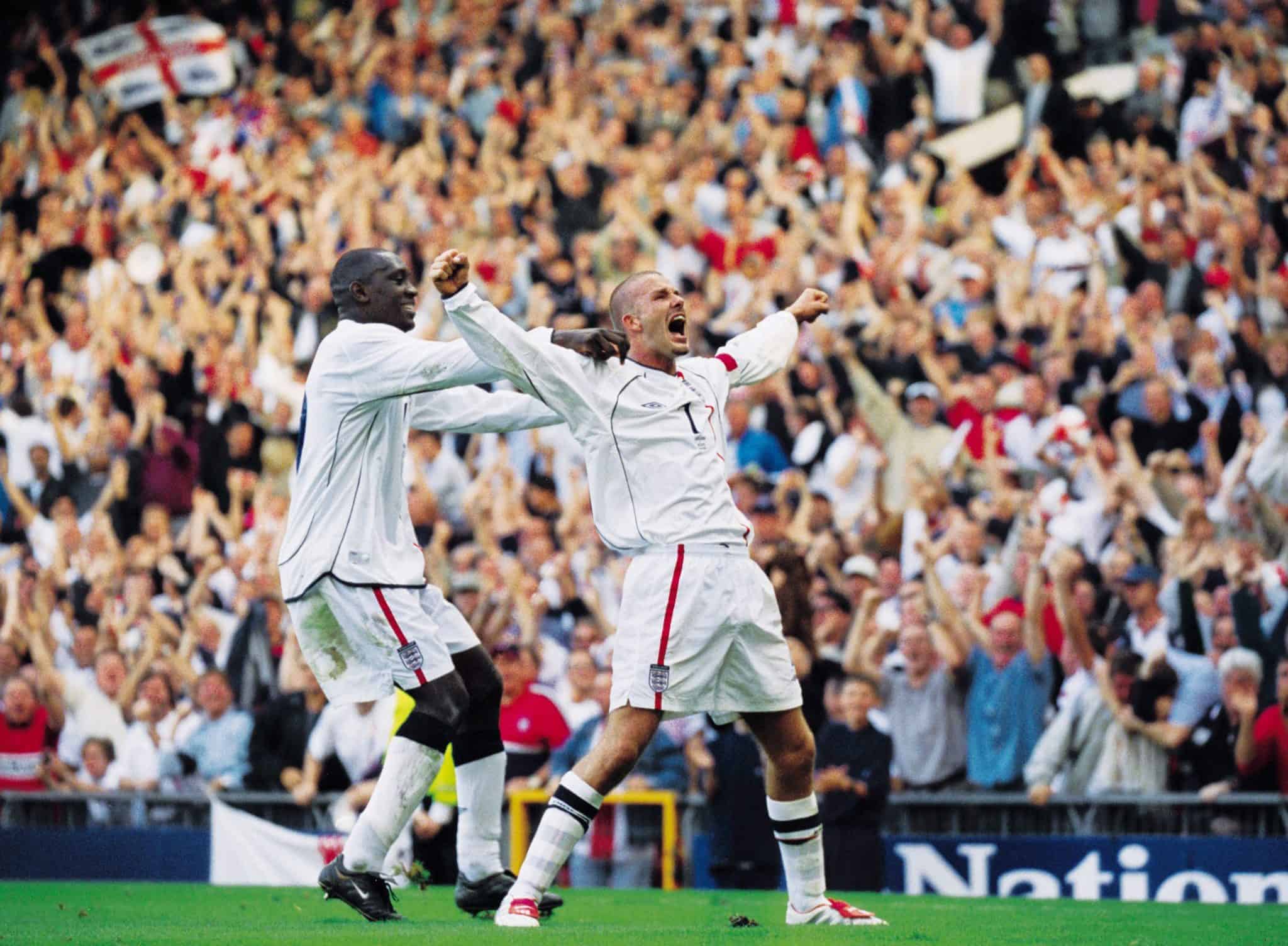 It might be hard to believe in 2020, but David Beckham was not always an England icon. In fact, there was a time when the former Manchester United and Real Madrid great was persona non grata.

When Beckham was selected as part of Glenn Hoddle’s England squad for the 1998 FIFA World Cup in France, his star was on the rise. He had yet to score for his country, but after establishing himself as an Old Trafford regular he – along with Michael Owen, Sol Campbell, Paul Scholes, Rio Ferdinand Gary Neville – was part of a clutch of exciting young players who would go on to be anointed ‘The Golden Generation’.

Things started slowly for Beckham in France. He was left on the bench for the Three Lions’ first two group matches with Hoddle accusing the then-23-year-old of not being focused on the tournament. Given the nod against Colombia in England’s final group game, Beckham made his point – and not for the last time – with an exquisite 30-yard free-kick in a 2-0 win.

But Beckham’s world was about to come crashing down. In the next round, a last-16 tie against old foes Argentina, the precocious winger was given a straight red card for kicking out at Diego Simeone. It was a petulant act which the Argentine midfielder later admitted he tried to get the England midfielder sent off for. England do a nice line in glorious failure and so it proved once more. After a heroic 2-2 draw after 120 minutes, Hoddle’s side were eliminated via penalties and Beckham was made the scapegoat.

Public enemy No.1 on his return to the UK, the Daily Mirror splashed on ‘Ten heroic Lions and one stupid boy’. They even went as far as printing a dartboard with Beckham’s face on the bullseye while an effigy of the Manchester United midfielder was infamously hung outside a London pub. Beckham later revealed he suffered death threats. 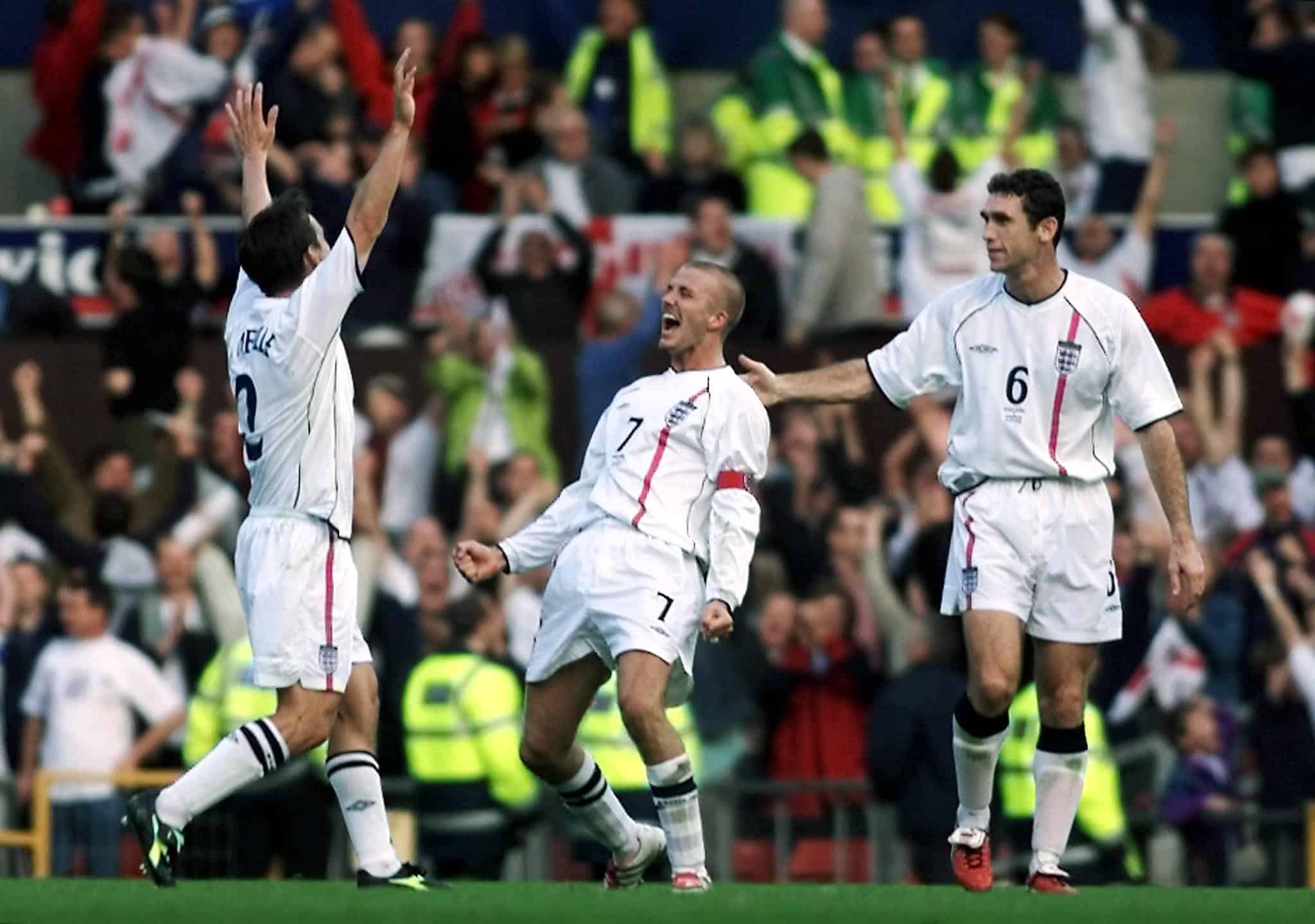 The abuse bled into the next international tournament – the 2000 UEFA European Championships – where, despite setting up two goals in a 3-2 defeat to Portugal, Beckham was targeted by England fans. He reacted by raising his middle finger to those dishing out the grief and, surprisingly, the British tabloids took his side. Even so, it was a surprise when caretaker manager Peter Taylor handed England’s much-maligned No.7 the captain’s armband, a role he retained when Sven-Göran Eriksson became the permanent Three Lions coach.

Performances and results improved under former Lazio boss Eriksson and peaked with a 5-1 win over Germany in Munich, a game in which Beckham played a part in four of the goals. The Three Lions went into their final Group 9 qualifying match knowing they could overhaul long-time leaders Germany. But only if they picked up at least a point at home to Greece and Finland denied Die Mannschaft what seemed a nailed-on victory.

Glorious failure was on the cards once more deep into stoppage time at Old Trafford. Trailing 2-1, to goals from Angelos Charisteas and Demos Nikolaidos, England looked set for a playoff tussle with Ukraine to secure their place at the 2002 FIFA World Cup hosted by Japan and South Korea.

Then, in the third minute of stoppage time, England were awarded a free-kick when Costas Konstantinidis fouled Teddy Sheringham – scorer of England’s opener – 30 yards from goal. At the home of his club side, very much within ‘Beckham territory’, the stage was set. In the crowd fans stood heads on hands, hearts in mouths, hoping, praying for a miracle from the man they’d tormented. 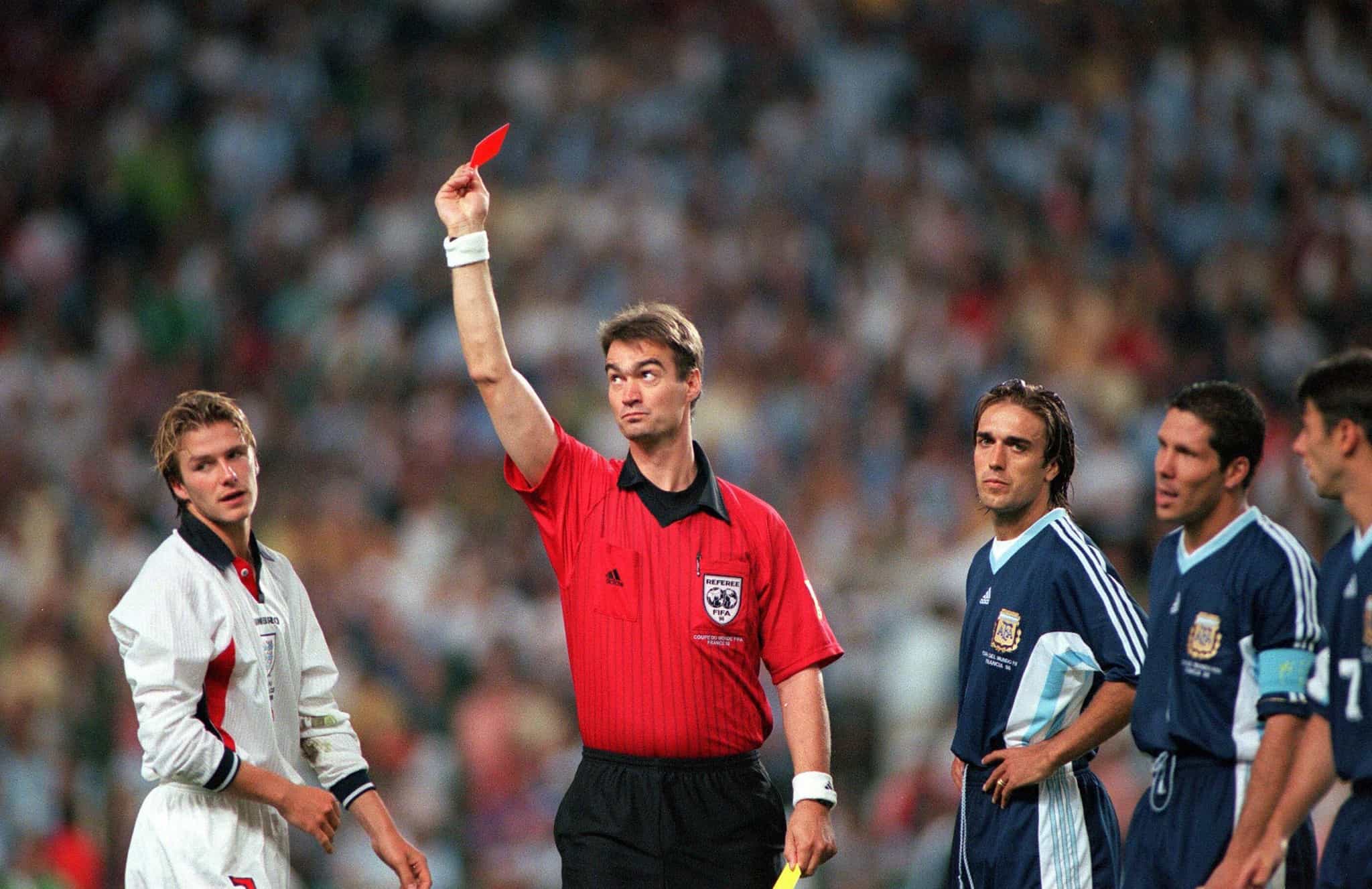 An interminable wait ensued as the seconds ticked by. Beckham stood over the ball, hands on hips. The coolest man in the ground. He began his trademark angled run, sidled up to the ball and, in a flash, whipped it up and over the Greek wall and beyond motionless keeper Antonis Nikopolidis. Cue bedlam. Beckham was off like a shot, arms out, baggy shirt billowing in the autumnal breeze, roaring with the satisfaction of a man who had in one moment of brilliance vanquished all his demons.

From villain to hero in a matter of seconds. News filtered through that unfancied Finland had somehow held Germany – who by next summer would be World Cup runners-up – to a goalless draw. Eriksson’s side had qualified for the tournament as Group 9 winners by dint of their superior goal difference.

Beckham enjoyed further redemption at the tournament itself, converting the penalty to beat Argentina four years on from his moment of madness in Saint-Étienne. But the truly iconic moment was Beckham digging his country out of a hole when they needed him most.

England have enjoyed far more auspicious moments since. But it speaks for their dearth of success over the years that this rescue act is one of the most iconic moments in the nation’s recent history. They’ve also had more stylish kits, but they have been attached to inauspicious times. This baggy, all-white effort with a strange, off-centre red stripe is unlikely to win any awards for style. Yet mention it to any England supporter and they’ll recall Beckham dragging his country to the World Cup with a moment of brilliance.

“The kick was about drawing a line under four years of abuse,” Beckham later said. “Four years of bitterness. Nothing was going to stop me taking that free-kick. I felt confident, calm, certain. I knew I could make it.”