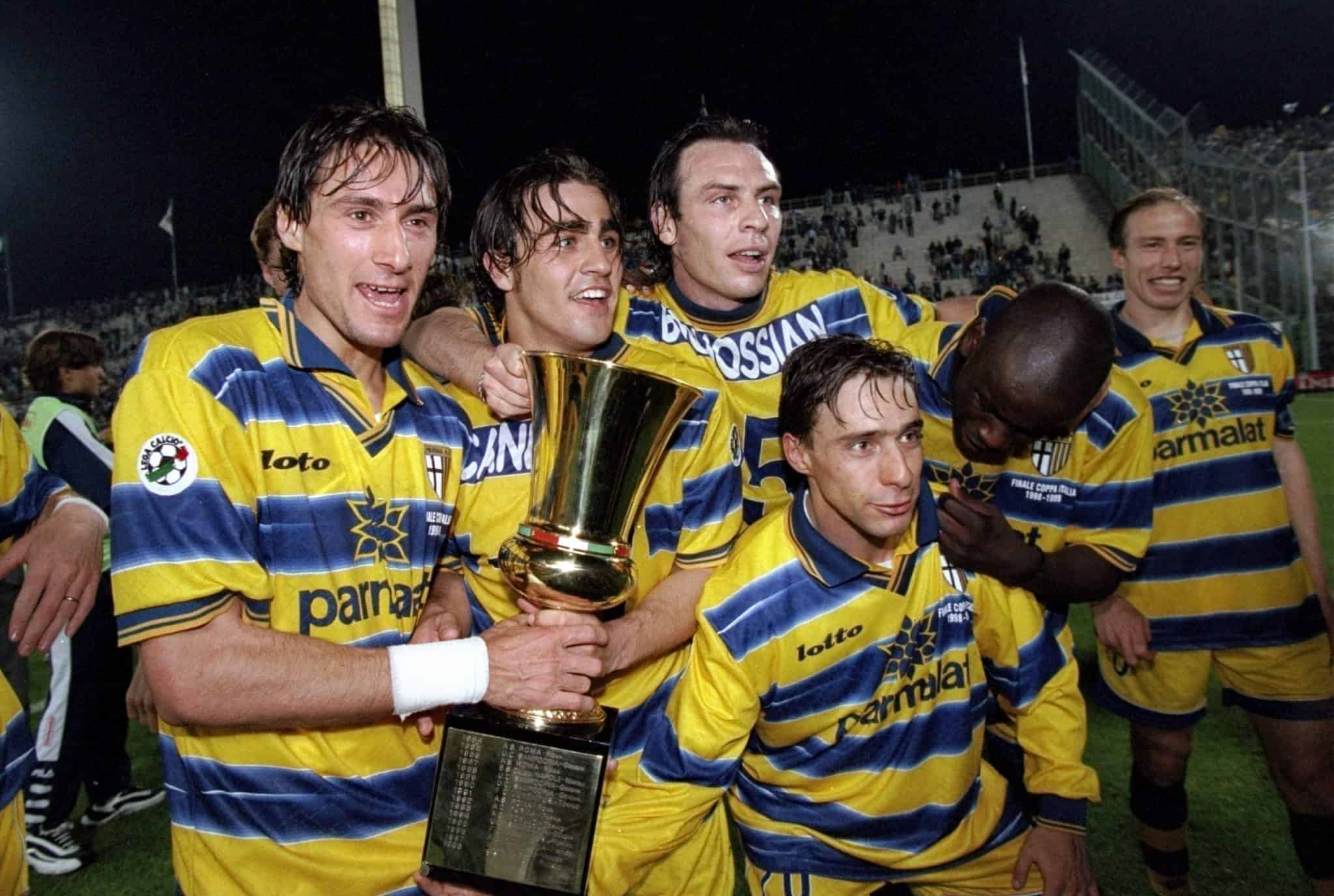 For football fans of a certain age it’s almost impossible not to look back at Italian football in the late 80s and 90s through rose-tinted glasses. In an era when England’s top flight was only just beginning to evolve into the international behemoth it is today, Serie A seemed to have it all – the biggest stars, the best teams and (most eye-catchingly) a wonderful array of vibrant kits that remain iconic to this day…

Paul Gascoigne’s transfer from Tottenham Hotspur to Lazio in the summer of 1992 was the catalyst for widespread interest in Italian football in the UK. While the Premier League was only available to Sky Sports subscribers, Serie A began airing on terrestrial television thanks to Channel Four’s Football Italia magazine show and live matches every Sunday.

With ‘Gazza’ drawing the limelight, it’s perhaps no surprise Lazio’s 1992/93 kit is remembered as one of the era’s most iconic strips. The combination of two shades of light blue is the defining aspect of this kit, with the darker colour used in a pattern of dashes that covers the entire shirt. There are similarities to Manchester City’s 2020/21 offering here too, suggesting this is a look that could well come back into fashion over the coming seasons.

There are certain sponsors which really add something to a kit and Fiorentina’s deal with Nintendo during the late 90s undoubtedly falls into that category. Perhaps it’s because the company’s red and white logo emblazoned across the chest is so synonymous with football gaming in that era – invoking memories of hours spent playing International Superstar Soccer 64 or FIFA 99.

It’s not just the sponsor, though. Fiorentina’s all-violet kits are unique and stylish regardless of what’s on them, while the talent assembled by manager Giovanni Trapattoni that season was particularly memorable. Gabriel Batistuta, Rui Costa and Edmundo were just three of the icons who helped Fiorentina challenge for the Serie A title in 1998/99, though they ultimately fell short; having to settle for third place and UEFA Champions League qualification.

Vintage style Adidas kits were all the range in the 80s and early 90s – think Hellas Verona’s Scudetto-winning side of 1984/85 or AC Milan in 1992/93 – but few teams wore it better than AS Roma in 1991/92. This wasn’t an iconic Giallorossi team by any means, finishing fifth under the stewardship of Ottavio Bianchi, but they were top of the league as far as style was concerned.

It’s hard to go wrong with a colour combination as distinct as Roma’s carmine red and golden yellow, but the nostalgic Adidas logo, red, white and green ‘target’ badge, and the wonderfully retro font of sponsors Barilla all come together to create a masterpiece. Legendary forward Francesco Totti didn’t make his debut for the club until the following season and went on to play 786 times for the Romans in all competitions. Perhaps his only regret is that he never got to run out at the Stadio Olimpico in this kit!

Yellow and blue hoops are a great colour combination, but this Parma kit is largely memorable because of the players’ who wore it – Gianluigi Buffon, Hernán Crespo, Faustino Asprilla, Juan Sebastián Verón, Fabio Cannavaro, Lilian Thuram… the list of stars who played for the Gialloblu in 1998/99 goes on and on.

This was a team which achieved so much while simultaneously never managing to secure a coveted Serie A title under coach Alberto Malesani. But while they’ll be remembered for a Coppa Italia and UEFA Cup double that season, the sheer volume of world-class talent in this Parma team is what makes their shirt so evocative.

It’s almost impossible to forget the kits worn by truly special sides when they achieve greatness. Ajax’s Champions League-winning shirt of 1994/95 or Manchester United’s treble-winning strip from 1998/99 are etched into the minds of football fans across the globe, and it’s a similar story when it comes to mid-90s Juventus.

After winning the Champions League in 1995/96, Marcello Lippi strengthened his squad with the signings of Zinédine Zidane, Christian Vieri and Alen Boksic, adding them to a star-studded team that already included Alessandro Del Piero, Didier Deschamps and a whole host of Serie A’s biggest names.

The Old Lady won the Scudetto that season before going on to repeat the feat the following year, securing major honours for a fourth consecutive campaign in a row. Their Kappa kit and Sony sponsorship are synonymous with that era, and the 1996/97 ‘two star badge’ edition is the highlight in a series of great shirts.