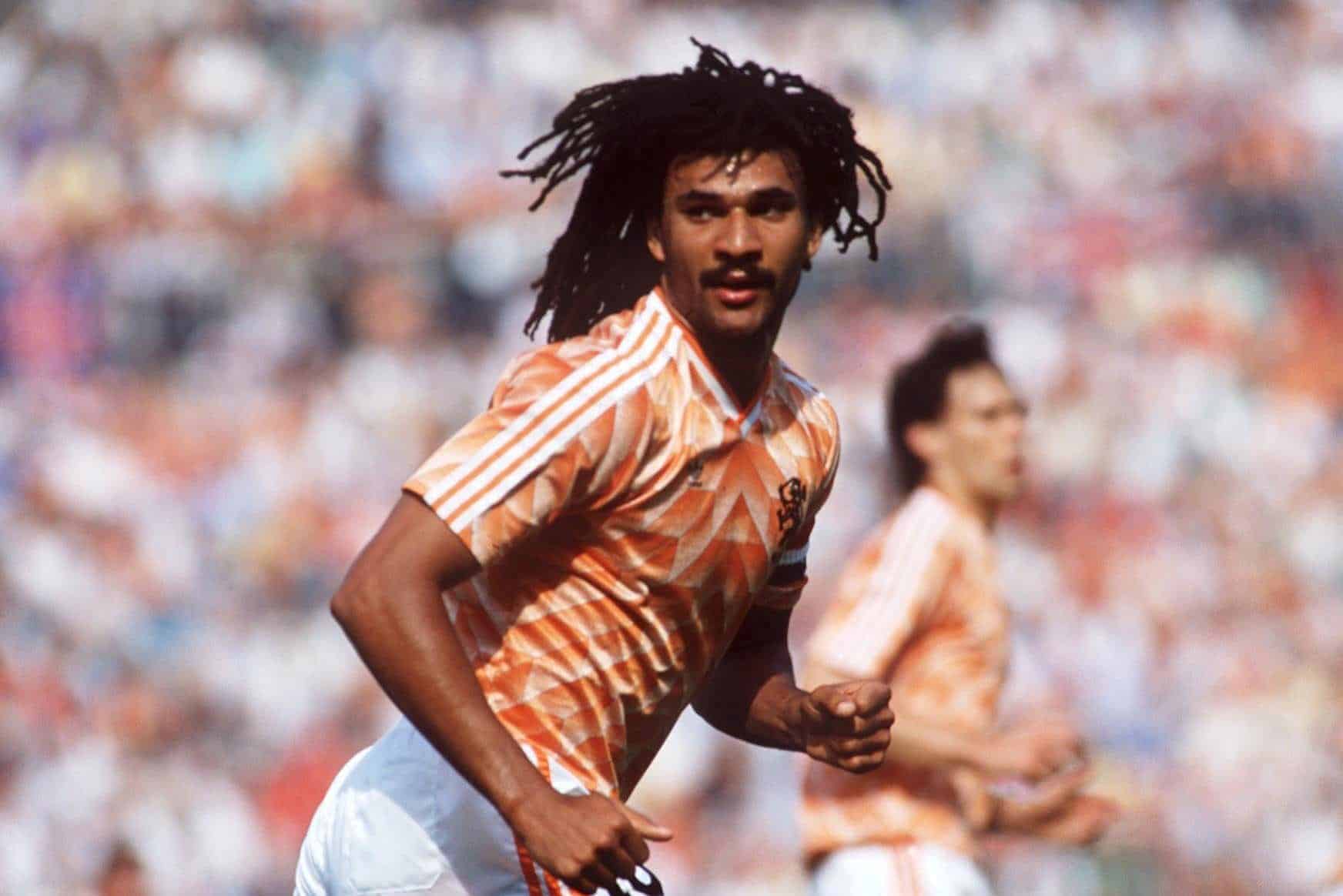 There’s no getting away from it – a lot of things used to be better in the ‘good old days’. None more so than football kits.

Designs like Hull City’s tiger print effort might not have been viewed as the height of fashion of sophistication at the time, but they have earned a cult status in the intervening years. Retro shirts are big business and even inspiring kit manufacturers in 2020. Take England’s new jerseys, designed by Nike, which are a throwback to simpler times.

After careful consideration and no little debate, we’ve compiled our top five retro kits of all time. There won’t be any Serie A kits, though. Italian football being the market leader in this field, we decided to dedicate an entire article to our favourite retro Serie A kits of all time. 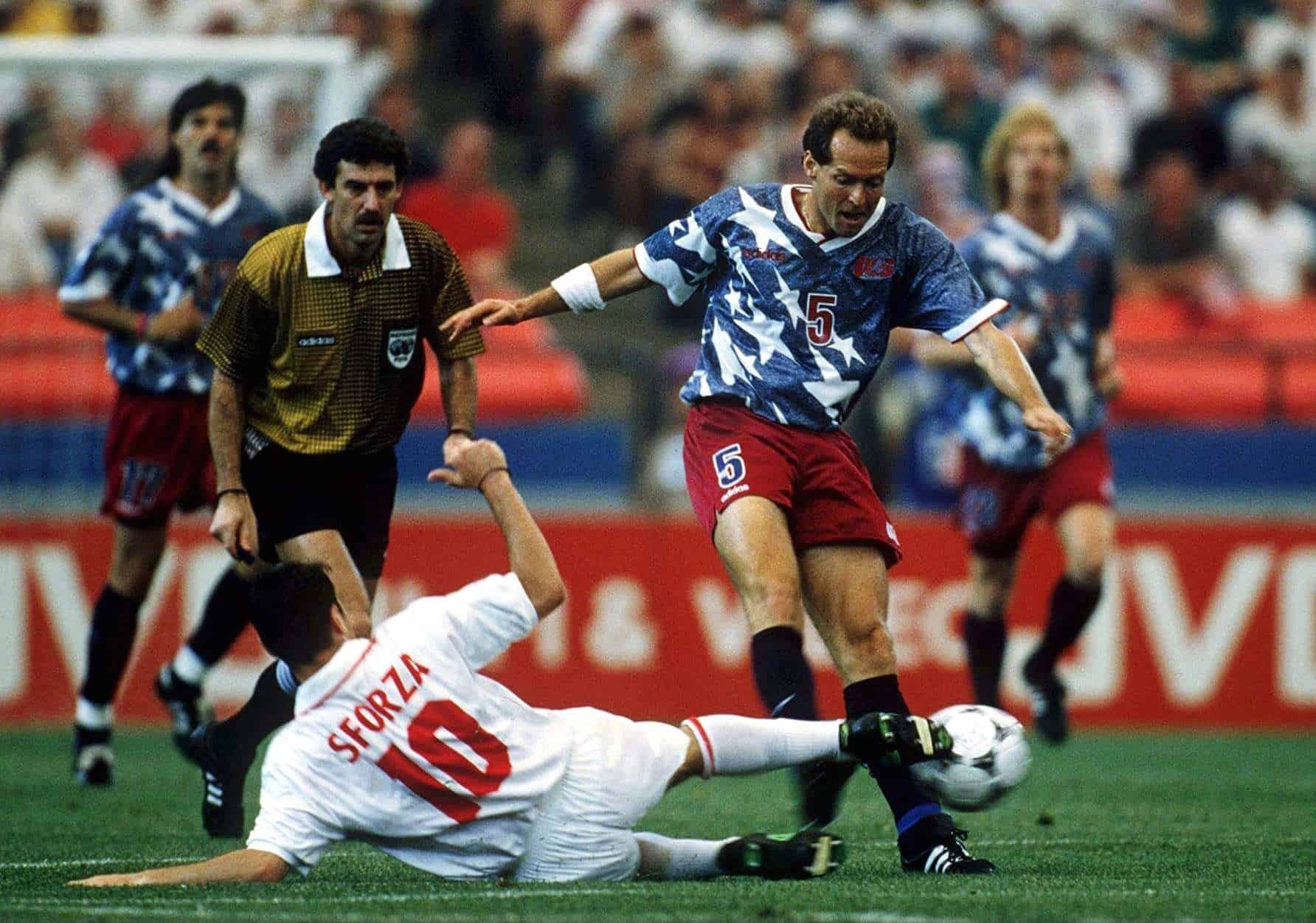 At the time of its release, the United States national team wasn’t taken seriously – unless you were talking about the women’s side which was, and still is, the best on the planet. It’s little wonder, when you see what Nike had designed for the USMNT to wear on home soil at the 1994 World Cup.

The denim-effect shirt might have been described as typically gaudy and American with its star-spangled sash emblazoned across the chest and shoulder. “We were like the cowboys of the world,” midfielder Tab Ramos said. “Here we were, wearing jeans.”

However, 1994 was a pivotal moment in the history of US soccer as the World Cup came to North America for the first time. Since then, the USMNT has gone from strength to strength with stars like Christian Pulisic, Weston McKennie and Josh Sargent playing in the Premier League, Serie A and Bundesliga. The World Cup returns to the US in 2026 as part of a joint-bid with Canada and Mexico.

Part of that legacy are the kits worn by Alexi Lalas, Cobi Jones and Tab Ramos en-route to the last-16 where they were knocked out by eventual winners Brazil. While the US only picked up four points from three games, their euphoric victory over Colombia was enough to set up a clash with the Seleçao. Some things improve with age – this kit is definitely one of them. 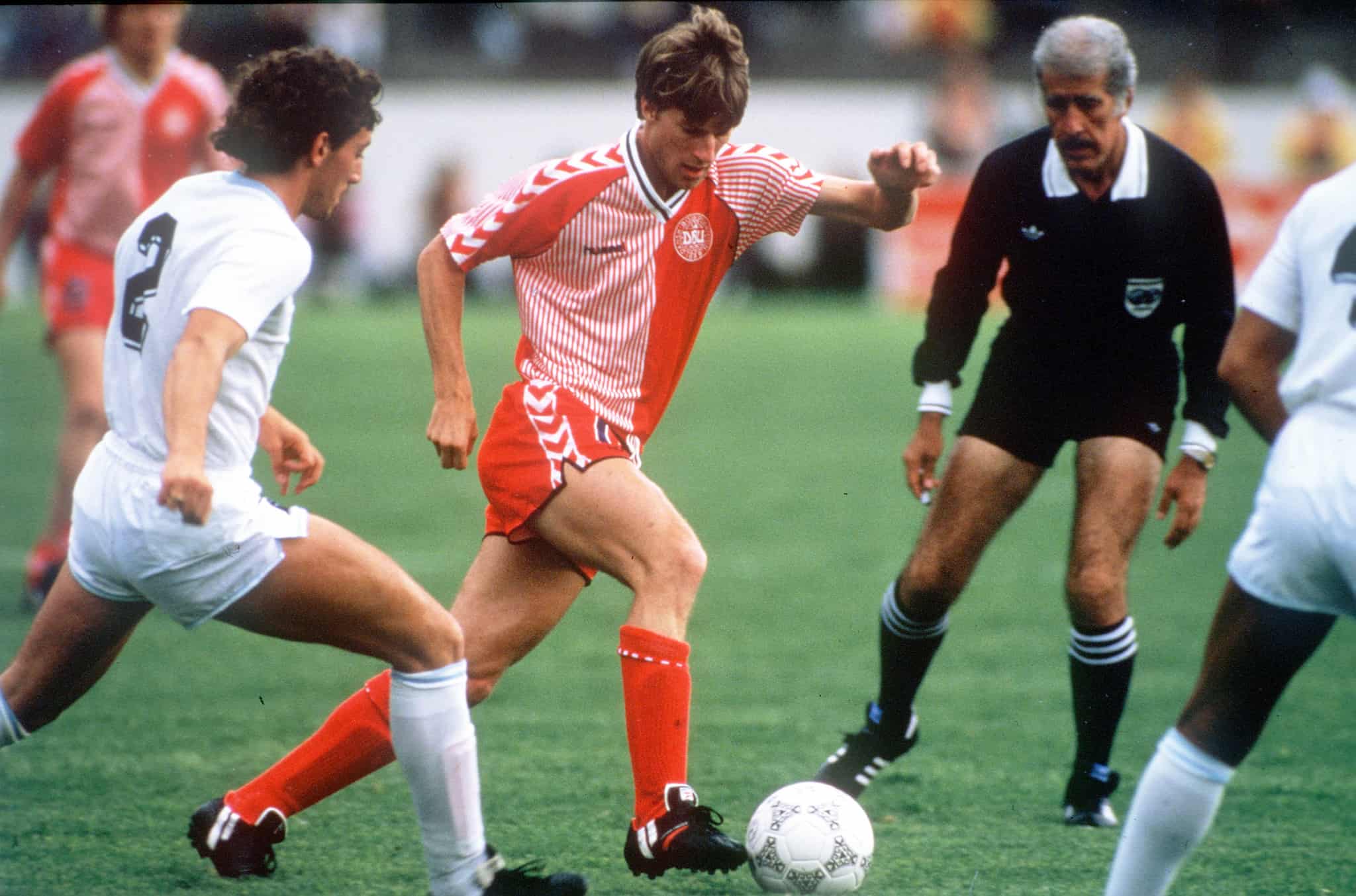 Hummel kits have begun to make a welcome return to the mainstream this summer with the iconic manufacturer designing Everton, Bristol City, Cambridge United and Southend United’s strips, among others. For a brand which came up with some of the most memorable designs of the late 80s and early 90s, this is a nostalgia trip we can get behind.

Arguably the most memorable of those kits was Denmark’s home strip from 1986-1988, just before the Scandinavian nation stunned Europe to win the 1992 European Championships, despite only being drafted in as late replacements for Yugoslavia just before the tournament began.

This kit’s beauty was in its simplicity. One half had a subtle two-tone red stripe while the other was a bright red that complimented the plainer half perfectly. The two patterns adorned the opposing sleeve to create a perfect symmetry. The whole thing was finished off perfectly with the iconic Hummel chevrons down each sleeve.

Nicknamed the ‘Danish Dynamite’ this side wasn’t half bad, even if they were a few years from their peak. Borrowing heavily from the Dutch side of 1974 in style, the likes of Morten Olsen, Soren Lerby, Frank Arnesen and Michael Laudrup powered the Danes to the last-16, scoring nine times to top a group which included Germany. A sign of things to come. 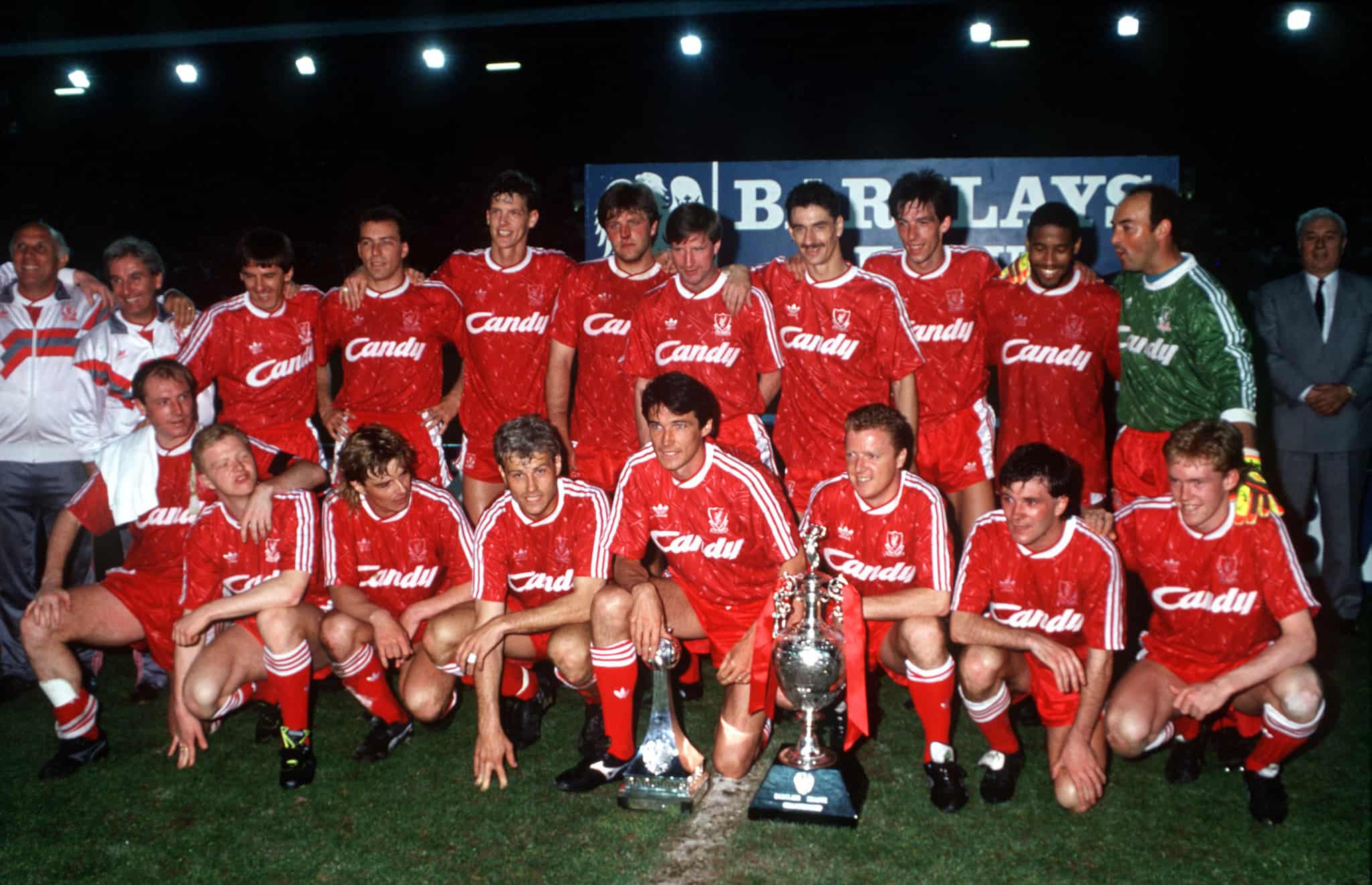 It’s rare a shirt sponsor doesn’t ruin a kit. It’s even rarer they compliment it. However, if you ask almost any football fan of a certain vintage to picture a Liverpool strip from the 80s and early 90s the chances are they’ll come up with a shirt adorned with the word ‘Candy’.

The Italian company – which produced household appliances – only actually sponsored the Anfield side between 1988 and 1992 before an equally memorable sponsor – Carlsberg – took over. But those were some of the Reds’ best kits from an extremely successful period.

However, the shirt we’re eulogising over wasn’t even red. It was Liverpool’s away kit at the time and it was, unavoidably, grey. The diamond design can only be described as ‘of its era’ yet in recent times we’ve seen similar geometric patterns creep back into the mainstream.

The colour, style and the sponsor all combine perfectly to create one of the most iconic kits of the pre-Premier League era. It’s doubtless helped by the likes of Ian Rush, John Barnes, Kenny Dalglish, Alan Hansen and co. wearing it while winning what was, until recently, the club’s last league title in 1989/90. 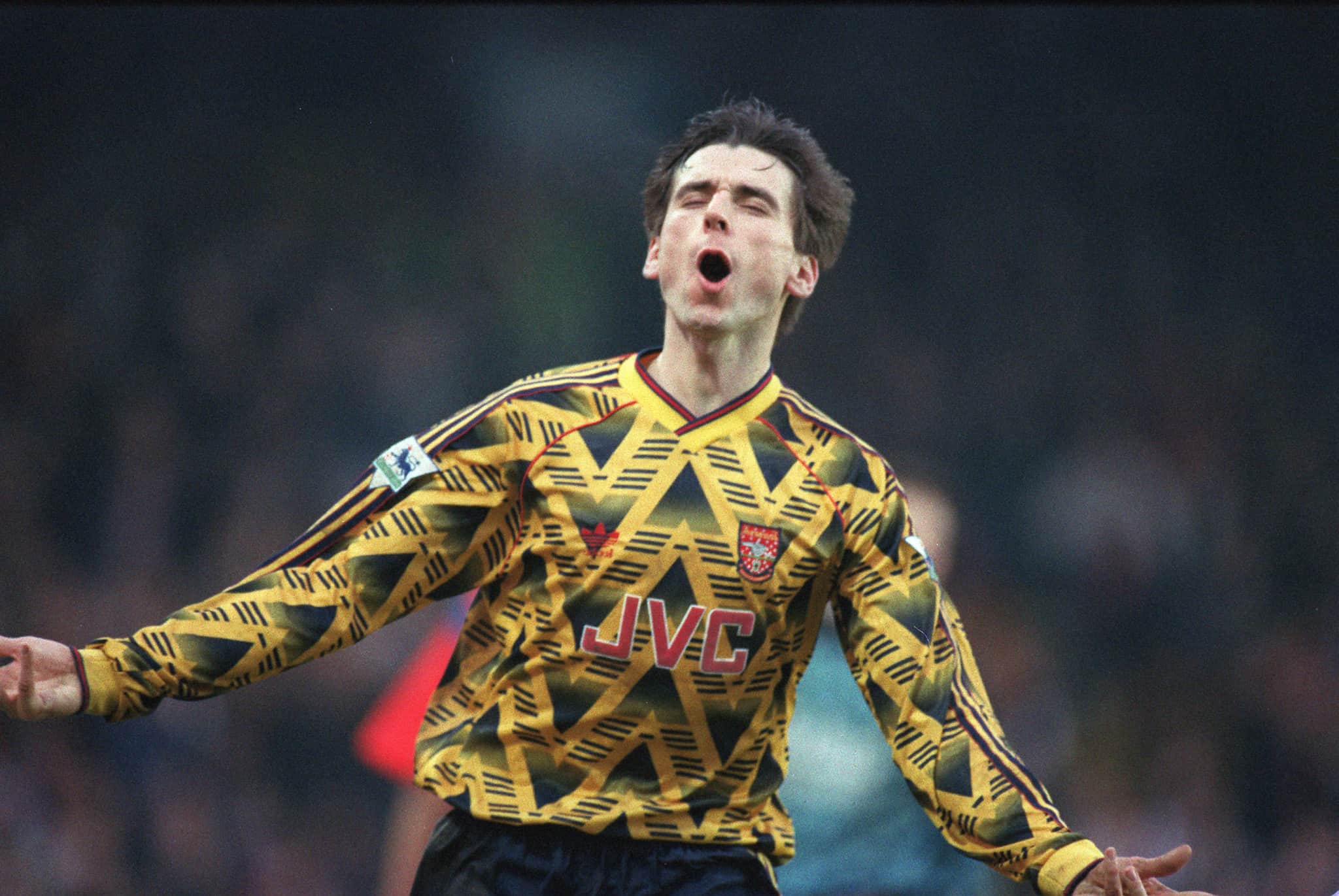 Certain players are only truly appreciated years later – for example, Juventus maestro Andrea Pirlo. The same can also be said of kits and Arsenal’s famous ‘bruised banana’ away effort from the early 90s was one of those. So much so, in fact, their 2019/20 change strip was designed as an homage to the original kit which has gone full circle – from fashion disaster to iconic.

The shirt was predominantly yellow – historically Arsenal’s primary away colour. Yet someone at Adidas decided to add a large black zig-zag pattern which adorned the entire shirt and, thanks to its gradient, looked like a banana which had seen better days.

However, the kit, which was worn by Gunners legends Ian Wright, Tony Adams, Alan Smith and Paul Merson, is now a highly sought after piece of memorabilia trading for more than £450 in some places online.

The Gunners’ 2019/20 away shirt was not quite as out there as its predecessor but was popular nonetheless. Still desperate for a nostalgia hit, Arsenal released a limited number of remakes of the original shirt in December, retailing at £75, with demand quickly outstripping supply. 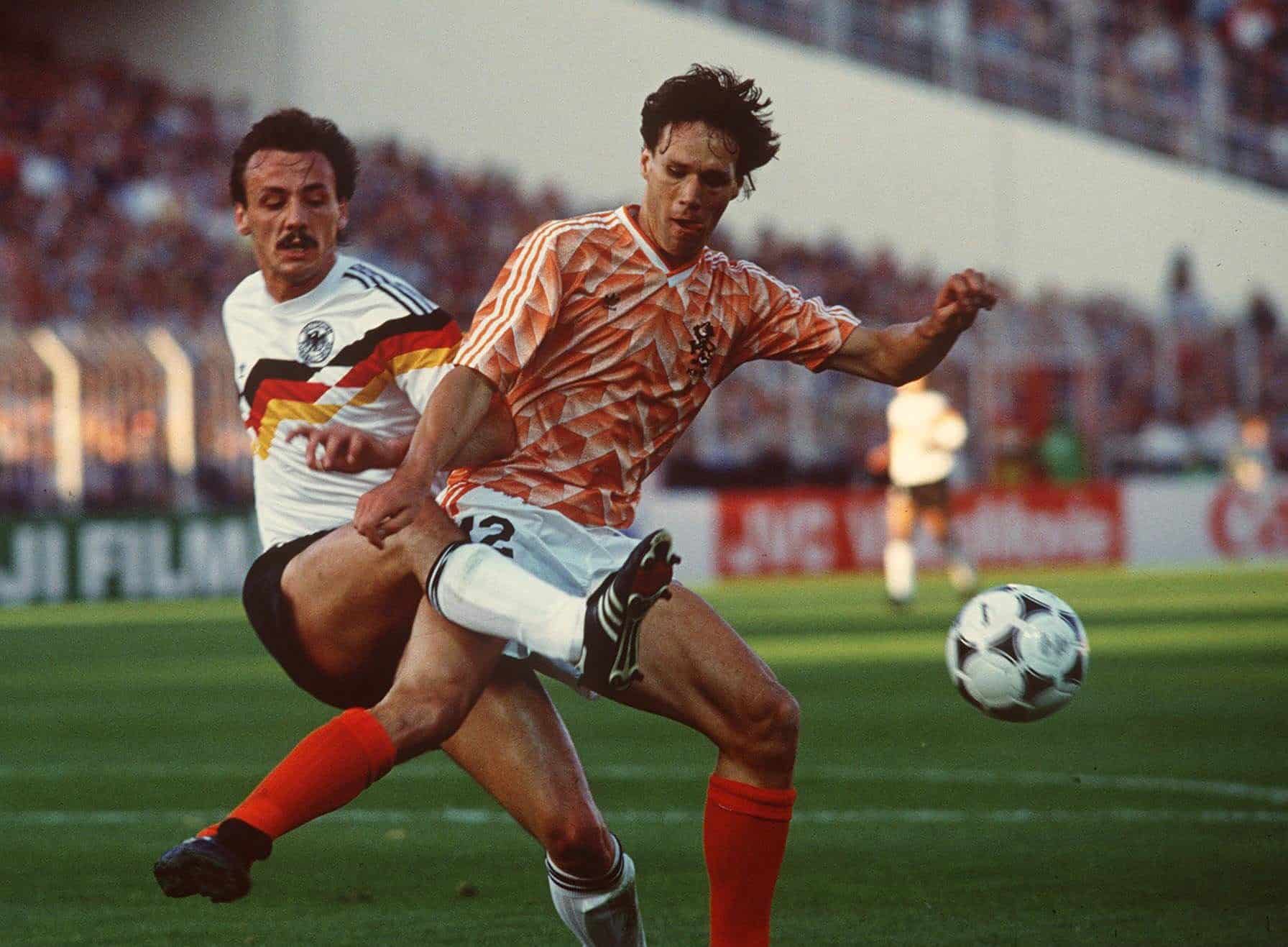 There has always been something exotic and alluring about the Dutch national team. The lack of international sides playing in orange probably has something to do with it, as do the iconic names to have worn it. The likes of Johan Cruyff, Marco van Basten and Dennis Bergkamp, to name just three.

The shirt we’re particularly interested in was worn between 1988 and 1992 and was arguably the most iconic in the nation’s football history. It was worn at the 1988 European Championships at which the Oranje won their first and only major international honour.

It’s true, the design itself isn’t vastly different to one or two others on this list. A geometric pattern with a gradient to each triangle, but there is something beautiful about its simplicity.

In September 2020, Nike released a new shirt which is a nod to that brilliant Clockwork Orange side of ‘88, led to victory in Germany by Ruud Gullit, Frank Rijkaard and Ronald Koeman. It’s a more subtle, diluted version of the original brilliant design and will be worn at the delayed 2020 UEFA European Championships next summer – 33 years on, could Virgil van Dijk and co. lead a new generation of Dutch talent to glory?

This year’s Football Shirt Friday is on November 20
We’re going to be building up to that date over the next four weeks.

But why are we supporting the @BobbyMooreFund?
@England legend Bobby Moore was just 51 years old when he died 1993.
Bobby’s widow, Stephanie Moore MBE, set up the Bobby Moore Fund with @CR_UK to help fund pioneering bowel cancer research.

Since its launch, the @BobbyMooreFund has raised more than £27m while mortality rates have fallen by 30%.
But bowel cancer remains the second-most common form of cancer in the UK.
We can still do more – that’s why we’re lending our support to #footballshirtfriday

Over the next four weeks you can expect to hear plenty more about the @BobbyMooreFund and our involvement in #footballshirtfriday so make sure you’re following to help support a vital cause.