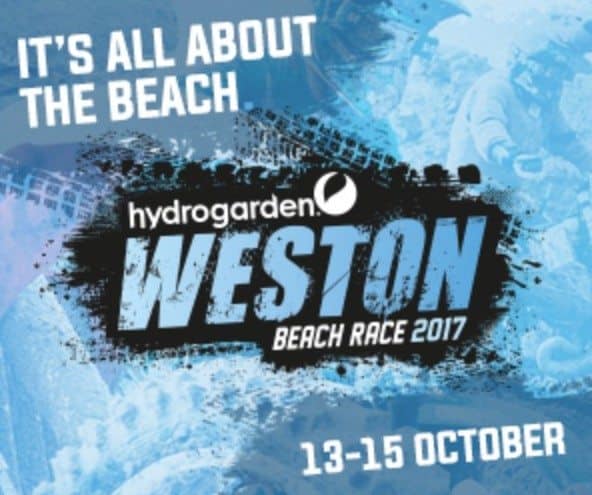 The HydroGarden Weston Beach Race 2017, with over 70,000 people visiting the Weston-Super-Mare event over the course of the weekend. There was some outstanding racing amongst the 900 riders, who took to the beach to combat the gruelling course. It was a weekend that certainly sorted the men from the boys!

It was always going to be difficult to predict the outcome of the adrenaline fuelled adult solo race. Kellett, sped out of the gate to enjoy an incredible start aboard his St Blazey MX/SJ Hodder Husqvarna, which saw him earn the top podium finish in the RPG Racing 4×4 quad class. Close behind down the 1.5-mile straight, Red Bull KTM Factory Racing’s Jonny Walker was second with Ashley Greedy third.

By the halfway point, Kellett managed a smooth pit stop, while Barr took the opportunity to edge into second and Knight was then able to take up third. Greedy dropped back to sixth, while Irwin was forced to retire from the proceedings, due to suffering some technical issues.

Kellett managed to maintain his consistency and speed throughout the enduring three-hour race, with the 20-year-old Somerset rider remaining untouchable approaching the final stages, allowing him to claim the well-earned victory. David Knight, who was the last rider to win Weston Beach Race back-to-back in 2010 and 2011. This year saw him take the runner-up spot and being the only rider to complete the race on the same number of laps as winning Kellet, after pushing his bike over the line. Buildbase Honda rider Martin Barr equalled his debut result from last year, finishing on the podium in third, after a spectacular battle between the amateurs and pros. Ross Parkinson was presented the HydroGarden Weston Beach Race Young Gun Award, as the highest placed 19-year-old with his 81st position.

Of course, the weekend is full of the most exciting off-road riding you will see, but it doesn’t end there. It is an incredible event for all the family, which included the multiple Indoor and Outdoor World Trials Champion Dougie Lampkin taking to the WD-40 Trials Arena, to perform some death defying stunts.

Lampkin was joined by Toby Martin, who put on an awesome display of their trials riding abilities, working with some seriously large WD-40 cans to showcase their skills to the crowd.

It certainly was not an event to be missed!