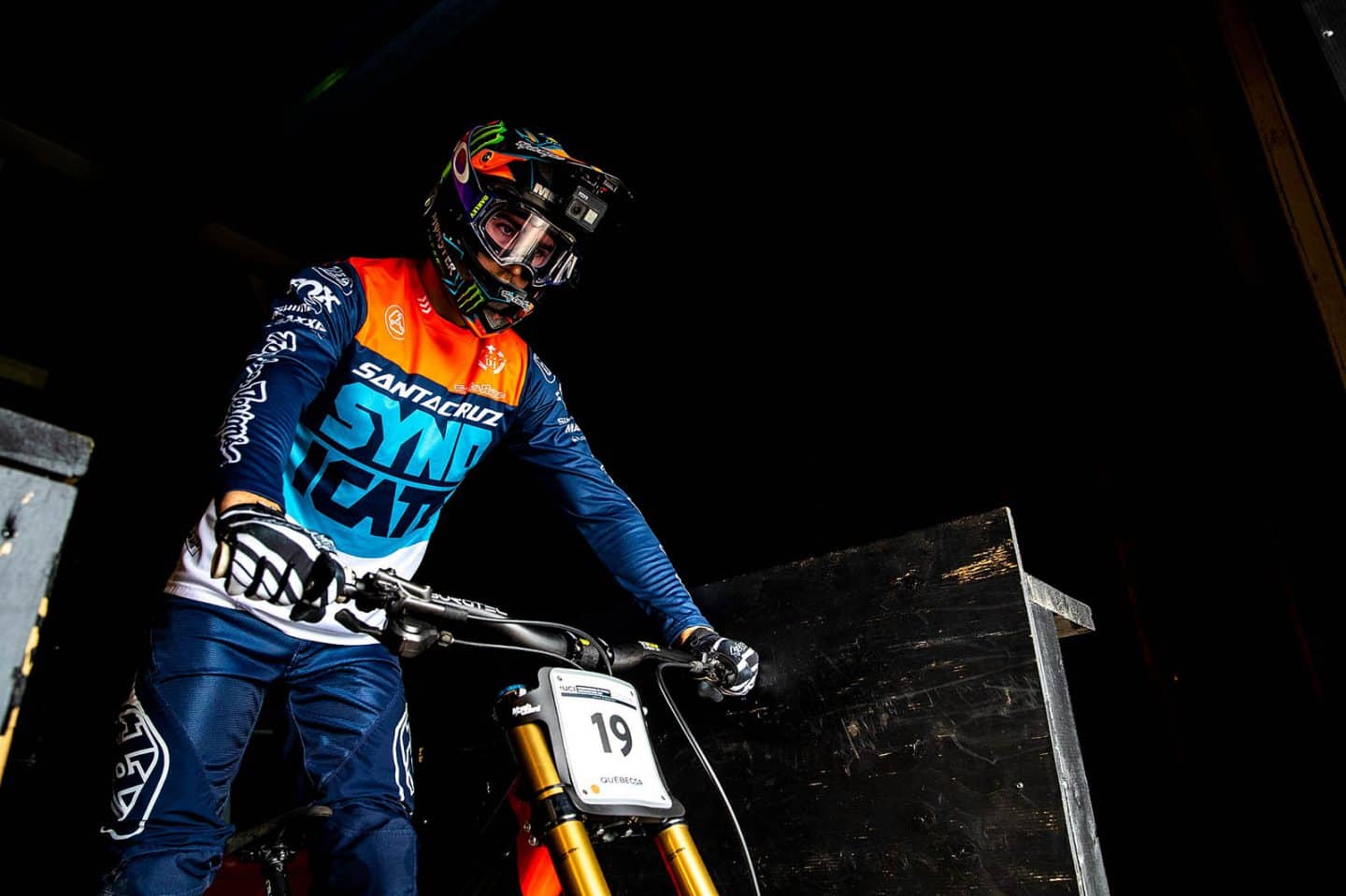 Mont Sainte Anne is a formidable track, well-known for how long, physical and rocky it is. The day arrived once again where one run decided who became worthy of the much sought-after rainbow jersey.

With tens of thousands of excited fans in attendance and all-new custom race bikes and kits, there was a definite buzz in the air.

In the pits, Santa Cruz Syndicate mechanics PA, Marshy, and Doug prepped fresh V10s for each of their riders. Cleverly, (and quite poetically) Greg, Loris, and Luca’s bikes each represent a link in the Syndicate Link logo.

Practice kicked off in wet conditions, so most played safe to avoid taking risks before the finals. Crashes, mechanicals and flats plagued several riders over the weekend as they attempted to get to grips with the track.

Despite the slippery track, Santa Cruz’s Loris qualified with the second-fastest time on the day. Luca started off his qualifying run with some technical issues, but was able to recover and finished 30th. Greg initially crossed the line in 7th, but was later disqualified after running off track. Fortunately, he was a protected rider and still in for Sunday’s race.

Rain fell throughout the night. However the sun came out in the morning and baked the moisture out of the track, creating near-perfect conditions for finals on Sunday afternoon. World Champ’s start times are based on overall World Cup ranking, so Luca Shaw was the first in the queue for the Syndicate on Sunday.

Triumphs and trials for Luca, Greg and Loris

Luca maintained focus and threw down an extremely fast run. His early split times showed he was on pace for the majority of his run, and he made the gaps in the rocky technical sections look easy. With limited coverage amongst the tight trees, it was hard to tell where Luca lost a valuable second but in the end, he slotted into 2nd and ultimately 10th on the day. Luca Shaw has been on the up all year since his early-season injury, and 10th is a strong finish at Worlds for the young rider.

Next out of the start ramp for the Syndicate was Greg. This was his 21st appearance on the track in Mont Sainte Anne, having been on the podium 11 times before. After crashing and returning from an injury last season, it was clear that Greg was out for vengeance. He had a near-perfect run on Sunday but lost a bit of speed in the final rocky section coming up a bit short in one of the last gaps. Minnaar would take over the hot seat and ultimately slotted into 5th on the day.

The last rider for the Santa Cruz Syndicate and the second-fastest qualifier, Loris Vergier, unfortunately clipped a pedal, catapulting him over the bars and losing all chances of contending for the famed rainbow jersey. However, Santa Cruz Syndicate still finished with two top tens at World Champs which is impressive work indeed.

The Syndicate heads off to Snowshoe next weekend for the final World Cup round. For now, massive well done to our guys!